For more information about this series of posts, click here. 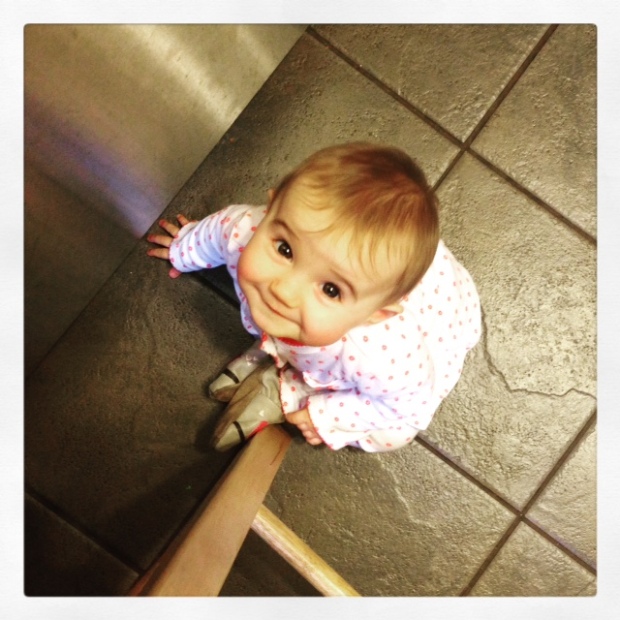 She is in her high chair, which I’ve pulled up to the counter so she can be closer to me. She’s eating puffs. This is a new development, her picking things up and eating them independently. She’s seven months old, soon to be eight months. I don’t remember when my other two started being able to feed themselves.

This time of day, mid-morning, when the others are at preschool, is when I “get things done”. Right now that means washing dishes. I realize, after several minutes of scrubbing, that I haven’t looked up and out of the window, even once. Or at my child, whose high chair tray needs refilling. I often have this problem; I can focus intently on one task at a time, but I have difficulty dividing my attention. This can be problematic, as parenthood is never one thing. It’s one eye on the clock, one searching for a lost shoe, hands occupied zipping up a jacket when they’re also needed down the hall, where the baby just got stuck crawling over a pile of Duplos.

Now, with the other two at school for three hours, I have only one child here to demand my attention, and she rarely does. (Even now, hours after I first started writing this, the other two are in their rooms for nap and quiet time, and Alex is crawling on the floor below my stool, pushing around a marker and a Barbie. When I look down at her she scrunches her face at me and smiles.) She’s a third child, like me, an observer, a tag-along, thrilled when one of us shows her special attention. I’m thankful  she understands that I’m only partly hers, even though it breaks my heart.

Still, this is more than I was ever able to offer my first two, when they were babies. Alex is still exclusively nursing. I was supplementing with formula by the time Maggie was five months old, and with Ceci, I just couldn’t face the thought of pumping in my classroom during my planning periods, and I gave up. She was eight weeks old when I went back to work. So there’s something to be said for making it this far, and for my relationship with my youngest. In a way, she needs me like the others didn’t.

The time we have together goes by quickly. When I’ve finished the dishes there is dinner to prepare and place in the crockpot. The laundry needs to be switched. She’s tired now, and I can check off those tasks while she naps. When I set her in the crib she doesn’t make a sound, just rolls to the side and sucks on her middle and index fingers, her way of self-soothing. I tell her I love her, I love her, I love her. Forty-five minutes later I wake her. It’s time to go get her sisters. Unsurprisingly, she makes no complaint.