If I had the time, which I don’t, I’d go back to all of my previous posts and count how many times I used the word “principle”. As in, I am a person of principles and so here is an example of an excellent parenting choice I’ve made based on those principles. I’d guess the number is somewhere in the vicinity of a crapload.

I have to hand it to myself, I got at least a solid A- in principled parenting for a good while. I watched what my daughters ate, steering them away from refined sugar and processed foods. Not wanting them to always expect flashing lights and robot voices, I controlled what toys they played with in our home. And I pledged, I vowed, that even if she had to spend years two through five in time-out, my kid would learn how to act without having to be spanked.

Are you hungry? Here’s a marker!

But then a day arrived (today, actually), when I found myself… BUYING OREOS. And bringing them into my home. And letting my children eat them. Earlier this week, I bought Pop Tarts. I don’t know what’s come over me. It’s like I suddenly don’t care AT ALL about my children’s welfare. Apparently I’m not the kind of parent I thought I was; the proof is in the pudding … in my refrigerator. (Just kidding- things haven’t devolved THAT much.)

I am also, apparently, the kind of parent who does sneaky things to avoid being interrogated by her children. Like buying ice cream and forgetting to mention it to the kids, or burying their pre-school worksheets in the bottom of the recycling bin. Unfortunately, my children seem to have superhuman powers of observation.  This morning, when my five-year-old opened the freezer to get out a waffle, she shouted, “Hey! When did we get ice cream in this house! Can we have it for dessert?” And today- this was stupid of me, I admit – this same child came with me to the recycling center to empty our bins. Upon finding her The First Thanksgiving booklet in a heap amongst Target receipts and toilet paper rolls, she looked up at me accusingly. “Why are you throwing this away?” It is now back on my dining room table, and will apparently be in my house for some time to come. 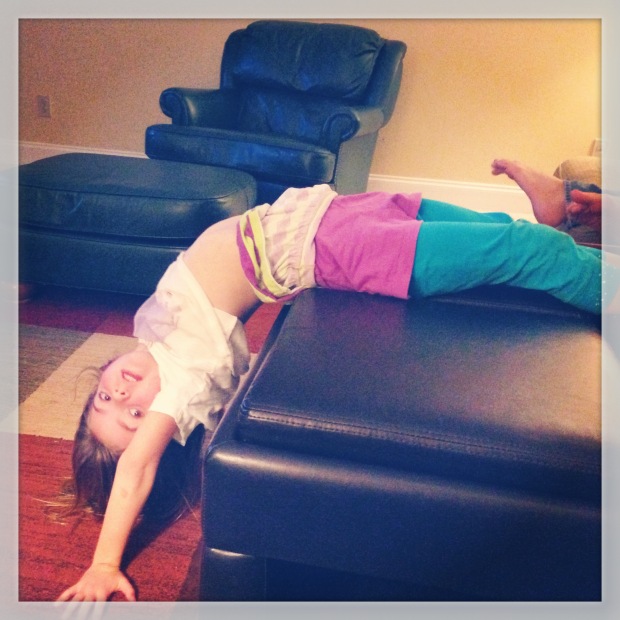 Sure, go ahead and do gymnastics on the furniture!

At some point I apparently became the kind of parent who adheres to the philosophy of, If you are playing quietly, I am not even going to check to see what you could possibly be doing that would result in such desirable behavior. If said behavior allows me thirty minutes to fold laundry, shower, or blog in peace, then you go right ahead and empty the contents of your dressers into a pile on your bed and then pretend that they are a swimming pool. Then go do something else destructive, quietly, so I can put the contents of your dressers back in.

When I first embarked on this journey I envisioned myself being the FDR of motherhood: solving problems creatively, leading my household with confidence, taking the necessary steps even when circumstances seem impossible, and earning the devoted love of my constituents. Turns out I’m more like Herbert Hoover, and people are going to start referring to their messy houses, full of grimy children, as “Prayvilles”.

The play room on a good day.